Images and photos, and text adaptation courtesy of NASA

MAJOR REGIONS OF THE SUN

A powerful magnetic field is created by electrically charged gas in the Sun's core. The gas is carried by gamma rays and x-rays in the radiation zone to create energy carried by "light that bounces from particle to particle" as it moves to the convection zone of the Sun to mix in a bubbling and boiling manner called granulation.The three outer layers of the Sun, the photosphere, chronosphere, and corona are the regions where the energy of the Sun created in its interior are detected as the sunlight that reaches the Earth. 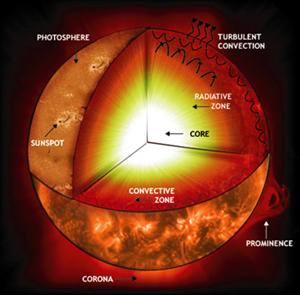 The sun is a bright blazing star. It is 4.5 billion years old and, as the center of our solar system,  it is 93 billion miles from Earth. The Earth's orbit around the Sun is said to be a  year. The Sun, only one of 100 billion stars in the Milky Way galaxy, rotates through the spiral arms of the galaxy in a pattern that takes 250 million of our Earth years to orbit once around the galactic center.

Hydrogen gases within the Sun's core are heated and pressed together until they turn into helium gas by a process called fusion. Every second this process turns 600 million tons of these gases into energy in the form of pressure  and light energy. It can take  millions of years for the light energy created by fusion to reach the surface of the Sun.

THE SUN ROTATES ON ITS AXIS

THE SUN'S LOCATION IN SPIRAL ARM OF THE MILKY WAY GALAXY 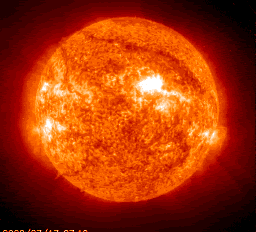 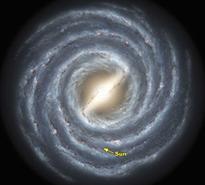