A layer of fine dust and rocks called regolith is spread over the surface of the Moon. Samples of lunar rocks were brought back to Earth by US astronauts who landed on the Moon during the Apollo missions that occurred from 1969 to 1972.

EXAMPLE OF SURFACE OF MOON 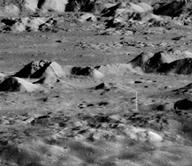 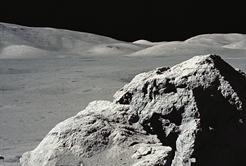 The lunar crust is made up of a number of elements including uranium, magnesium, iron, aluminum, silicon and the gases  oxygen and hydrogen. It is now believed  that water ice can also be found in some of the deeper craters.

THE FAR SIDE OF THE MOON

FULL MOON AS SEEN FROM EARTH 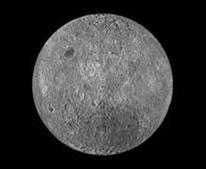 The near side of the Moon is divided into lighter areas called Lunar Highlands. Darker areas known as Lunar Maria define areas lower in altitude that are filled with ancient beds of solidified lava dating to a time when the Moon exhibited volcanic activity. Both areas are cratered from meteor impacts. The far side of the Moon shows a smoother appearance with few Maria.

The Moon is a round rocky celestial body that circles the Earth at a distance of approximately 378,000 kilometers once every 29.5 days defining what is considered a month on Earth. Due to gravitational forces only one side of the Moon can be seen from Earth. The far side of the Moon remained unseen to earthlings until the Soviet spacecraft Lunar 3 photographed it in 1959. 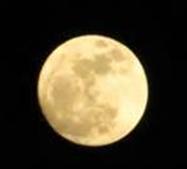